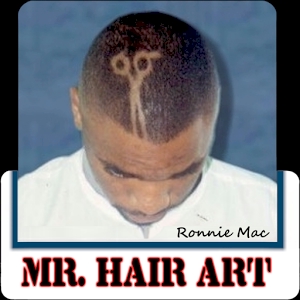 Thank you for your interest in the world of Hair Art! We here at the Hair Art NETWORK pride ourselves on upholding the most rigorous standards of practice to build and improve our industry.

Hair Cutting and Hair Styling is one thing that every person on the planet understands and can relate to. The profession of Hair Styling is one of Honor and Respect. There are also many areas of Hair Styling. One of which is one that Hair Art NETWORK Owner, Mr. Ronnie Mac, is perfecting. Hair Art and Hair Art Designing! Hair Art is not a new thing. The cutting of letters, numbers and even pictures has existed and has been practiced for thousands of years! From the ‘TRIBAL TIMES’ where the local African tribes would shave their heads into different patterns to signify and designate which tribe they were from and even their rank in that tribe to ‘EGYPTIAN TIMES’ where emperors and leaders of the land would send messages carved into the hair on “MESSAGE RUNNERS” heads to the other lands. This of course was done so that the message could be covered with a turban and only be read by the recipient and not the runner! Very interesting times…

Hair Art has played very important roles all throughout the time. And today is no less important. We are here to help embrace and project that importance by reminding the world about Hair Art and how it can be used today!

The Hair Art NETWORK was created in May of 2000 by Mr. Ronnie Mac. Mr. Mac is a Grand Master Hair Artist that has been doing Hair Art for over 25 Years. From the humble beginnings of cutting his own hair in the bathroom of his family’s home in the lower Projects of West Dallas, he continued to improve on his craft.

Mr. Mac… “I Love cutting hair. I don’t think I have ever had anything else in my life that has ever made me more happy as a profession. When I began cutting, I would go into the bathroom and practice in my own head. Every week when my hair grew back in I would cut something different in my head. My mother and father was always encouraging me with my skills and helping me to get better. Once I started to show that I really had talent my brothers and cousins started asking me to cut their hair. Then my friend and their friends. A LEGEND WAS BORN!”

Mr. Mac attended Texas Barber College and graduated Top of his class in 1995. He went on to work in several barber shops that year only to find that merely working in a shop was not enough for him. He wanted to own his own shop! The next year Mr. Mac found the location that would become his first in a line of many of his own Barber and Beauty Salons. Starting in a small 500 square foot rental space near Down Town Dallas, Mr. Mac worked for years improving and upgrading his location and his talents in hair.

Mr. Mac… “Owning my own place was the best move I ever made. I liked being able to just come to work and cut hair without any other pressures of business but it just didn’t feel right. So I left the world of booth rent and commissions to join the world of OWNERSHIP! And I liked it more! I found that I not only had the freedom to move my business in the direction I wanted it to go but I was able to expand on my chosen craft, Hair Art. That’s when I started doing Hair Shows!”

Mr. Mac continued on his personal war path of creating the “Perfect Salon”. He started searching for larger and larger spaces to acquire and convert into a B&B Salon (Barber and Beauty Salon). In 2003 he found a 7,000 square foot location in South Dallas and began his experimenting with ‘Mega Salons’… This is where you combine multiple areas of business into one. He was incorporating a Barber Shop with a Beauty Salon along with a Game Room, a Restaurant and even a GYM! When Mr. Mac saw how much room he had in these large scale buildings, it was only a matter of time until he would enter the world of Hair Shows!

Mr. Mac… “I started putting on Hair Shows inside my shops because I had so much room. I was already getting a lot of attention from my Hair Art Designs so I thought to myself; Hey, I might as well use some of this room to make some money off of it. See, the rent on them buildings was no joke! Some months it was a real struggle. So, I decided to go ahead with the shows and boy that was a great idea! Man, I started making so much money doing shows that it started to over shadow my day to day operations of the shop! We were having a Hair Show every 3 months and then every 2 months and then I refined the process down so tight that we were putting on Hair Shows EVERY MONTH! And even renting out our building to other Shops and Salons to hold their events in our building… LOL. That’s when I started my last business ‘Shops & Salons’ and boy did I LOVE that one!”

In 2005 Mr. Mac opened up Shops & Salons. A 10,000 square foot facility located in Pleasant Grove in Dallas, Texas. This was to be his largest most complex location and the beginning of Hair Art! Shops & Salons housed a Barber Shop and Beauty Salon equipped with 27 Barbers and Hair Stylist. A large scale Game Room. A 52 seat Restaurant where most of the events took place. A personnel and customer GYM equipped with a mirrored Dance Studio. A Kids Play Area for customers to drop off their children when they come to get their hair done as well as the stylist working at Shops & Salons to have a place for their kids to be while mommy and daddy is working. The list of amenities that Mr. Mac made available at Shops &Salons goes on and on. From the outside Car Wash for the customers while they got their hair done to the in-house Beauty Supply for customers and their own stylist to prevent them from having to leave the salon to get supplies while customers sat waiting! Mr. Mac prided himself on making sure his location had everything. He even put the entire Salon on the internet LIVE! 24 Hours a day the customers and stylist were able to go on the business web page and see “What’s going on up at the Shop!?!”

Mr. Mac… “Shops & Salons was my most beloved business venture to date. I was able to do almost all the things I was dreaming about in that business. My customers Loved it and my Stylist Loved it. But best of all, with this new location I was able to start preparation for my biggest most advantageous business yet! The Hair Art NETWORK!!!”

The Hair Art NETWORK was officially started in 2009. Several elements of the business were being worked on and prepared for in the years prior but Mr. Mac took it to the next level when he officially announced Hair Art NETWORK.com. The website combined all elements of all Mr. Mac’s businesses under one roof! From Mr. Mac’s ‘MEGA MEMBERSHIP’ (Personalized I.D. to give Discounts to Valued Customers) to ‘HHH Charity’ (Mobile Conversion Salon Buses to perform Haircuts for the Helpless and Homeless Charity). Most of all Mr. Mac valued an extension of the website called Mr. Hair Art STORE! It was because of the Hair Art STORE that many of the other areas of his business could be funded.

And that brings us up to Today. As of right now Mr. Mac is preparing the biggest and most exciting events that the Hair Art Industry has ever seen, most of which is Top Secret. There are thousands of Barbers and Hair Artist enjoying one element of the Hair Art Empire. That being in the form of Hair Art Products! Mr. Mac has perfected and put on sale many Hair Art products that have now surpassed One Million Dollars and are breaking records in sales! The highest performing product in his arsenal are the infamous Hair Art STENCILS! The Hair Art STENCILS were created to assist the amature and the professional Hair Artist in creating Hair Art Designs. By placing a stencil on the head of a customer and lightly spraying the stencil with one of the Mr. Hair Art Color Sprays, you will be able to remove the Hair Art STENCIL to reveal an exact copy of that Stencil Design onto the head. Now all the Barber or Hair Artist has to do is simply follow the line and cut out the design! Thus making Hair Art Designing Easier and more Profitable! Mr. Mac has all these things and a great many more planned to launch at the beginning of 2012.

Mr. Mac… “I have prepared for this very moment for my entire life. I want everyone to go to www.HairArtNETWORK.com and sign up and get ready for the Hair Art STORM that is coming! Buy my NEW Hair Art KIT and get the whole story on Hair Art ADVERTISING because next I will be starting the World’s Largest Hair Art ADVERTISING Competition in 2012 with the Largest Prize in Hair Show History ($1,000,000)!!! You don’t want to miss this! I will see you inside the Network. And remember our motto: RESPECT YOURSELF BECAUSE IMAGE IS EVERYTHING!”

Thank You for visiting our Hair Art Store!
We want you to come back often to see our Daily Deal and all the new Hair Art Products that we upload weekly! Contact Us if you have any questions or concerns.
(ALL HAIR ARTIST SIGN UP AT www.HairArtNETWORK.com)
Thanks again for shopping with us here at the Hair Art NETWORK Store!